SOLDIER OF ROME – The Legionary 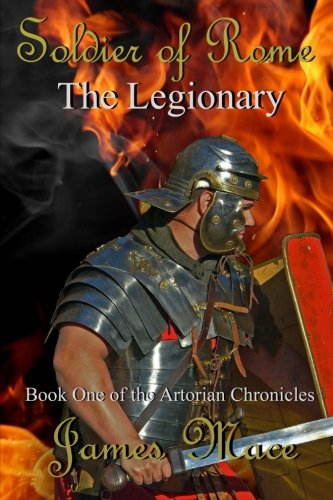 In the year 9 A.D., the Roman army suffered a terrible defeat in the boggy forest of Teutoburger Wald in Germania. Their leader, Publius Quintilius Varus, had placed his trust in his ally Arminius, war chief of the Cherusci tribe, unaware that Arminius was secretly forging an alliance of various Germanic tribes to oppose the expansion of the Roman Empire.

Arminius betrayed Varus by leading his forces into an ambush, and the Romans suffered with catastrophic losses in the battles that ensued. Three legions were annihilated, and many officers took their own lives rather than suffer the shame of defeat and the horrific punishments inflicted by their victors.

Such is the background of SOLDIER OF ROME – THE LEGIONARY by James Mace, which I recently narrated for Audible’s audiobook version. It tells the story of Artorius, the younger brother of one of those soldiers who lost their lives in the epic defeat of Teutoburger Wald.

Having sworn to avenge his brother’s death, Artorius enlists in the army and trains to become a member of the Twentieth Legion. He sets out with 40,000 other legionaries under the command of Germanicus Caesar to defeat Arminius and exact a terrible revenge for the treachery of six years previously.

Author James Mace has drawn on his passion for Roman history and meticulous research into the military practices of the period to create an exciting, gritty and realistic portrayal of the Romans’ infamous defeat and its aftermath.

This is the first of six books in the Artorian Chronicles series. I’m looking forward to narrating the next part later in 2014.

This site uses cookies: Find out more.
Go to Top